Sony and From Software previously teamed up for the development of Demon’s Souls, an innovative experience that has spawned three spiritual successors: Dark Souls, Dark Souls II and the recently-released Bloodborne.

For Bloodborne, the two companies partnered again to create the new intellectual property. While it has the same core elements found in the previous Souls games, it also featured some innovative changes. Not to mention that the experience got even better following the 1.03 title update. So just how good is the patched version of Bloodborne? You can find out with our review of the PS4 exclusive below.

The story of Bloodborne is full of mysteries. Gamers will play as an outsider traveling a plague-ridden city known as Yharnam in order to seek the coveted Paleblood. The game keeps exposition light with very little NPC conversations and cut scenes. This keeps the experience suspenseful as you won’t know what will happen next. Not to mention that it results in a lot of chatter if you want to delve deeper into the lore and talk about the mysteries with other players.

So, while Bloodborne is not the most cinematic game, there is more than enough compelling plot points that will keep you interested throughout your playtime.

A lot of the game’s story come from exploration as From Software put in a great deal of effort in designing the levels of Bloodborne. Similar to Dark Souls, the locations in the action-RPG interconnect, mostly through the use of shortcuts. The levels fit naturally in terms of continuality of the locales in addition to tying into the main plot.

Not to mention that you will never feel worn out at exploring a particular location as the game will constantly throw out interesting locales to explore in addition to scenarios for you to encounter. You also don’t have to worry about any poorly designed levels that plagued the previous Souls games (like Blighttown from Dark Souls and Valley of Defilement in Demon’s Souls).

The only real drawbacks are the maze-like optional Chalice Dungeons, which use the cut and paste design of finding the switch to a boss gate that is located near the beginning of each level. Even so, these optional areas are worth exploring, especially if you want to fight some of the best bosses, and even normal enemies, the game has to offer. 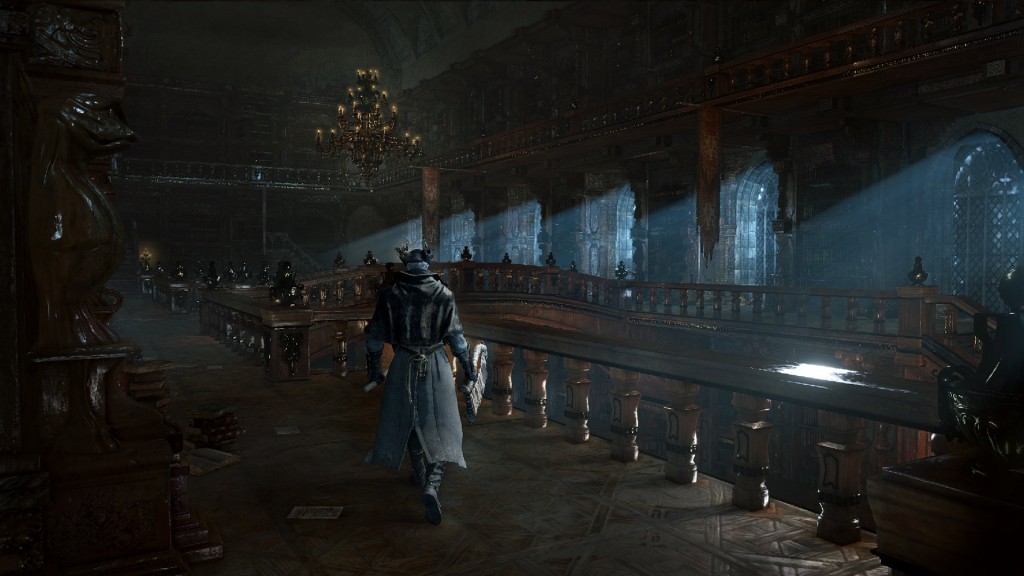 The boss and enemy designs also mesh well with the levels in Bloodborne. The character models of the opposition can be quite horrifying, which fits perfectly with the gothic horror theme. As a result, fighting the enemies feels a lot more intense than the prior Souls game.

Some of our favorite designs for the normal enemies include the Brainsucker, who can grab you and suck on your head to permanently steal you valuable Insight items. The other is the Labyrinth Madman, who lets out a loud scream and then rushes at you.

The boss designs are even more grotesque. For instance, the Blood-starved Beast has its skin ripped apart, completely hanging out and leaning the rest of his flesh exposed. Add in the fact that most of the boss battles are quite difficult and you have one of the best survival-horror experiences in Bloodborne even though it is more of an action role-playing game. 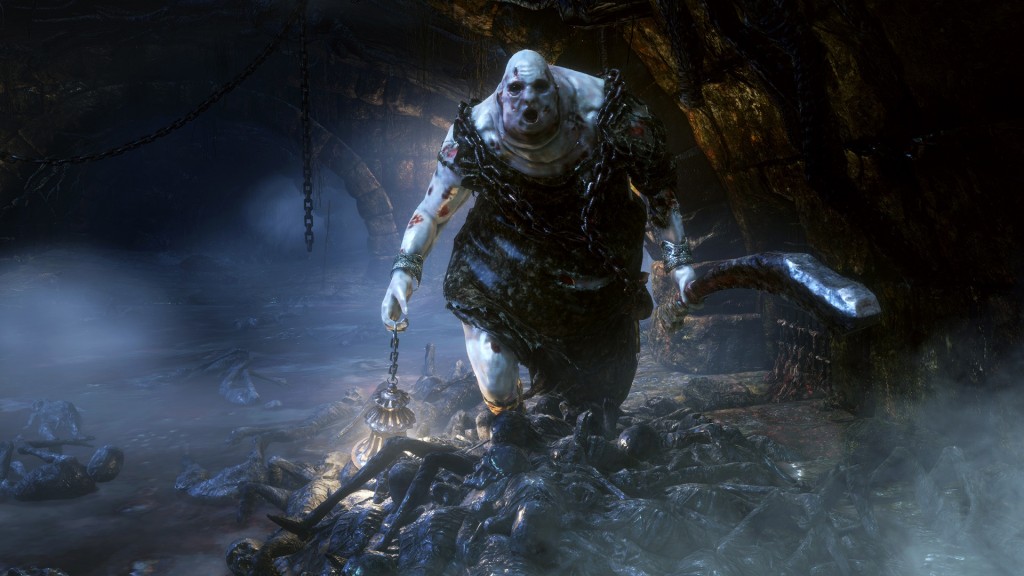 What makes the enemies even scarier is the combat. From Software decided to switch things up a little bit with Bloodborne in that both the player and enemy move a lot faster than before. Block has also been rendered useless as, although you can find a shield in the game, you are much better off dodging.

The biggest change is the new health regain system. If you character takes a hit, he or she will have a short amount of time to regain the lost HP by hitting back at the enemies. Of course, the opposition can also hit back at the same time, causing a permanent lost of health until you use a Blood Vial. This new risk/reward mechanic adds another level of intensity as you need to figure out when is the best time to attack as oppose to falling back to heal.

With the increased combat speed and the addition of health regain, Bloodborne plays a lot better in battle than its spiritual predecessors. Thus, you will most likely have a hard time going back to Demon’s Souls, Dark Souls and Dark Souls II. The multiplayer elements from Bloodborne has also been better streamlined when compared to the past games. You can still leave and read messages in addition to seeing the ghosts of other players. For matchmaking, the game requires players to ring a bell if they want to summon others, be summoned or invade. From Software also allows you to play with friends by using the new password system along with being able to share Chalice Dungeons.

With that said, Bloodborne is still mainly a single-player game as being able to connect to other players have several restrictions. For one, you have to be at the around the same level. For co-op, the session will end after you defeat the area’s boss, forcing you to reconnect to a friend if you want to continue. Multiplayer should be seen as a cherry on top of an already excellent single-player experience. As you can see above, Bloodborne has its own unique style when it comes to levels and enemies. No other game, especially in this generation of releases, look like the PS4 exclusive.

With that said, there are a few issues. One of which is that some environmental models, such as statues, are reused, which is not really a big deal to us. The frame rate can also be a little inconsistent at a few potions although it is nowhere near as bad as some of the sections of Dark Souls and Demon’s Souls on last-gen consoles.

Shortly after launch, From Software released the 1.03 patch to address several issues with Bloodborne. The biggest fix was the load times, which was previously excruciatingly long. With the patch, loading to new areas, especially when you respawn after dying, is noticeably faster. Not to mention that the “Bloodborne” loading screen has been replaced with a rotating list of item descriptions, giving players some to do while waiting.

The other notable issue was multiplayer matchmaking as it is a lot easier to summon and join others after the title update.

In addition to the regular version, Sony also released a collector’s edition of Bloodborne. The more expensive SKU comes with a nicely-designed steel book case that has slick art work from both the outside and inside covers. Also included are a 50-page art book in addition to a digital soundtrack, which is downloaded from the PlayStation Store and can be played on the PlayStation 4 (you can also transfer the tracks to a USB storage device).

So, if you don’t mind paying a little bit extra, the Bloodborne Collector’s Edition is definitely worth buying. You can check out the current price tag for the product with this page. 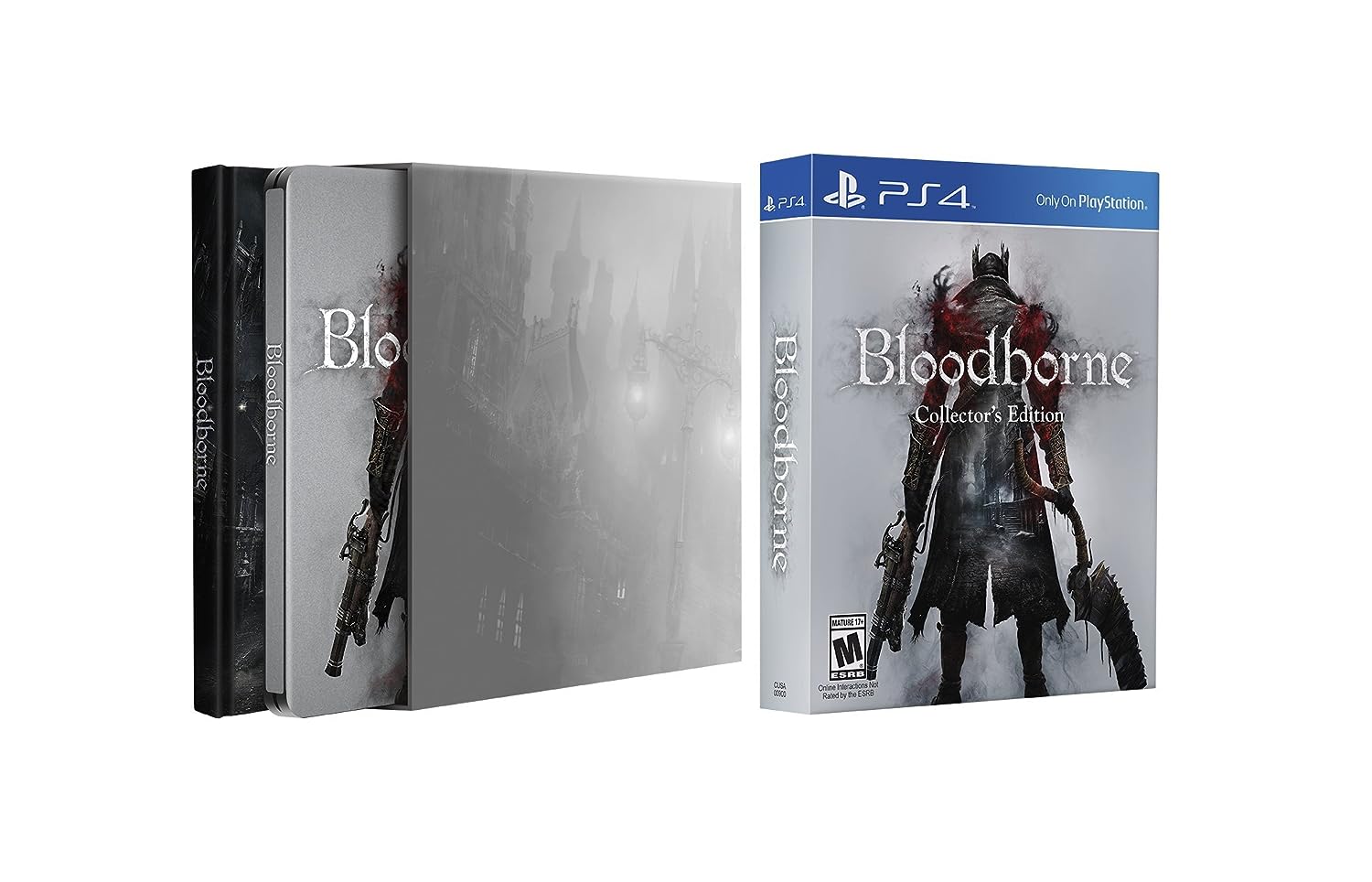 Bloodborne is a masterpiece of game design and is easily the best exclusive on the PlayStation 4. The exquisite level and enemy designs will keep you interested in the lengthy campaign that won’t overstay its welcome. Not to mention that you can also explore the optional Chalice Dungeons, which have some thrilling boss fights, if you want more from the experience. With incredible visuals and sound to boot, it is very easy to get lost in the world of Bloodborne, which has been made even better with the 1.03 update.