With its weird face button placements, the Gamecube controller did not have a great first impression when it was first introduced to the public. Once gamers got their hands on the gamepad, however, they realized how comfortable it was to hold, especially in games that require quick reflexes like Super Smash Bros. Melee.

While Nintendo included Gamecube Controller ports for the Wii, the company did not do the same for the Wii U. As a result, you will need to purchase an adapter if you want to use the gamepad for the current-gen console. So what are the best third-party GameCube Controller Adapters for Wii U? Find out in our buying guide below.

Why you need an adapter for Wii U

First off, let’s talk about why you need an adapter for the Gamecube Controller on the Wii U. While only one game supports the pad, it is quite a popular title in Super Smash Bros. for Wii U. Even though multiple controller options are supported, the best way to experience the brawler is with the Gamecube pad. As a result, demand for the adapter were much higher than anticipated.

About the official first-party version

Nintendo released an official first-party version of the GameCube Controller Adapter, which lets you connect with up to four gamepads, as a standalone product as well as a bundle that also came with Super Smash Bros. for Wii U and a Super Smash Bros. Classic Gamecube Controller. Both SKUs ended up selling out well before release as Nintendo could not manufactured enough (and are still having trouble today). As a result, you will have to pay a huge markup in price if you want to purchase the official first-party GameCube Controller Adapter.

Thankfully, several third-party manufacturers have stepped up to the plate to offer alternatives that are much cheaper to purchase. The most popular of the group is the one from Mayflash. With that said, the adapters from KELUX, LVL99Gear and NEXiLUX have also gotten great feedback from the Super Smash Bros. community. You can check out the best third-party GameCube Controller Adapters on Amazon with the links below:

All four products mentioned above have the same functionality as the official Gamecube Adapter as you can connect up to four pads with each of them. 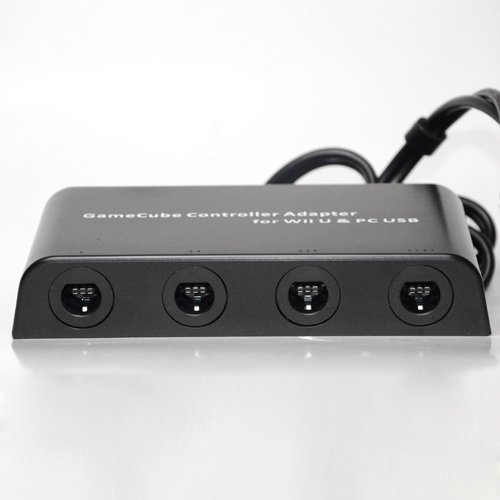 Of course, you will need actual Gamecube Controllers in order to take advantage of the above-mentioned adapter. Although original pads are no longer widely available (that is, when being sold as new), Nintendo did release a black and white version just for Super Smash Bros. for Wii U. The only real difference is that the cords for the newer releases are longer when compared to the older units.

How to Install the Adapters

Installing the third-party adapters is super easy as you simply plug the two USB cables into the Wii U. The system has two USB ports located on both the front and back sides. Super Smash Bros. for Wii U can support up to eight players locally, so you can use two adapters at the same time.

One potential problem you may run into when using Gamecube Controllers on the Wii U is that your analog stick may not be calibrated correctly, causing your character and cursor to uncontrollably move around. This is due to the fact that the stick was not set into a neutral position when the system is booting up. To fix this issue, you can disconnect and reconnect the controller. You can also hold the X, Y and Start/Pause buttons for around three seconds for it to recalibrate.

With the KELUX, LVL99Gear, Mayflash and NEXiLUX GameCube Controller Adapters, you should be able to get the best possible gamepad option when playing Super Smash Bros. for Wii U without having to overpay for the official first-party version.