Believe it or not, Borderlands: The Pre-Sequel is actually coming out soon. As with many other big videogames, an official strategy guide is being prepared for the product. So what’s exactly is inside the Borderlands: The Pre-Sequel Signature Series Strategy Guide from Brady Games? According to Amazon the book is packed with 400 pages and comes with a premium cover. Check out the price of the item right now on the e-commerce website with this link. The cover is below this paragraph. 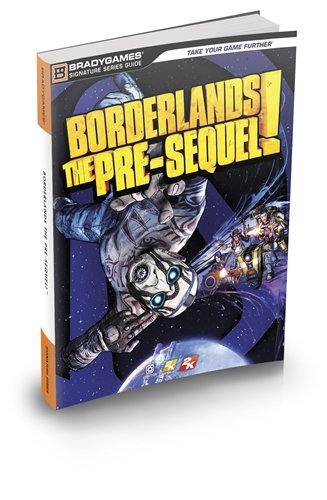 The official strategy guide has the complete walkthrough, including tips to defeat bosses. It is also providing intel on some of the new equipment and weapons being added to The Pre-Sequel like jet packs, lunar vehicles as well as ice and laser weapons. Maps and bestiary are also added in for true completionists.

Borderlands: The Pre-Sequel Signature Series Strategy Guide is available on the 14th of October, the same day as the launch of the videogame. The plot of the upcoming game is set between the first two games on the series. It stars Athena, Claptrap Nisha and Wilhelm as playable characters. If you haven’t already, you can preorder the Xbox 360, PlayStation 3 and PC game right now on Amazon by visiting this page.