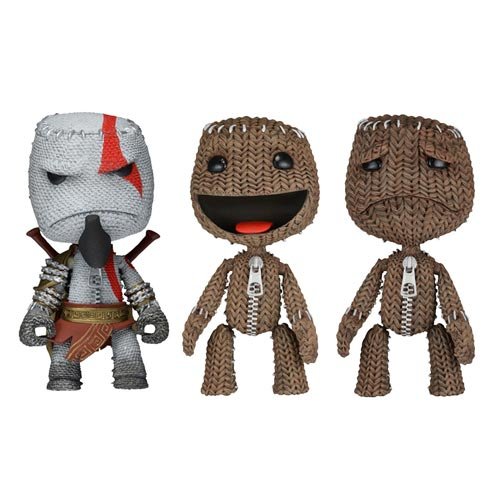 NECA will be releasing the first series of action figures based on LittleBigPlanet. The original set includes a Happy Sackboy, Sad Sackboy in addition to Sackboy dressing up as Kratos from the God of War franchise. If you are interested, you can buy the three figurines individually, or through a bundle, with the following links on Amazon: Happy Sackboy, Sad Sackboy, Kratos Sackboy and LittleBigPlanet Series 1 Action Figure Set.

Each of the three figure measures at approximately five and a quarter inches in height. The Kratos Sackboy can also be seeing storing the Blades of Athena Weapons on his back. Amazon has a listed release month of September for the NECA LittleBigPlanet Sackboy Action Figures.

Sony released LittleBigPlanet 3 last year on the 18th of November in the North American region for the PlayStation 4 and PlayStation 3. Instead of Media Molecule (who is working on another project), the development for the sequel was mainly handled by Sumo Digital.

The third installment of the series increased the amount of layers to 16 in addition to adding new tools and playable characters. The sequel is also backwards compatible with the community levels created from the first two mainline releases and will upscale to 1080p on the PlayStation 4.