Amazon has listed the North American release of Final Fantasy Type-0 Side Story Vol. 1: The Ice Reaper. The first volume of the manga will be published by Yen Press in the west with an ISBN-10 of 0316305405 in addition to an ISBN-13 of 978-0316305402. You can preorder the first chapter via this page on the online retailer’s website. Check out the cover of the book with the image under this paragraph. 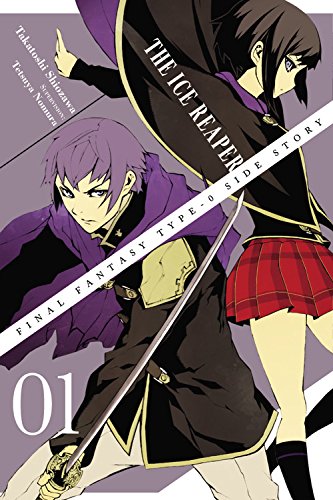 Final Fantasy Type-0 Side Story takes place nine years prior to the events of the videogame. Vol. 1: The Ice Reaper will follow Kurasame and his ascension to be “one of the Four Champions of Rubrum and the Reaper of the Icy Blade.” In total, the first volume will have 176 pages.

Kurasame is one of the more intriguing characters from the JRPG. So, if you are interested in learning more about his background, you should check out Final Fantasy Type-0 Side Story Vol. 1: The Ice Reaper when it is made available in North America later this year.

Final Fantasy Type-0 HD was released earlier this year for the PlayStation 4 and Xbox One. It is the first game in the franchise to feature a Mature rating from the ESRB due to some violent scenes.