Dark Souls 3 is one of the biggest releases of 2016 and with good reason as early reviews have shown that the sequel provides another excellent experience in the action role-playing franchise. If you are planning to pick up the software product, we also suggest getting the following complementary products so that you can get the most out of the third mainline Dark Souls release.

The Souls games are known for its brutal difficulty in addition to well hidden secrets. If you are planning to do everything there is to do in the sequel, then we recommended picking up the official strategy guide. Depending on your preferences, you have three potential options.

The cheapest alternative is the standard edition of the guide. This book will provide a comprehensive walkthrough, including detailed maps so that you can easily find every shortcut and important items as well as being prepped for traps and enemies. You will also learn about the best strategies to take down the enemies and bosses as well as the full lists of armor, items, spells, weapons and upgrades. The coverage includes character builds for both player versus enemy and player versus player.

Along with the physical book, the Dark Souls III: Prima Official Game Guide also comes with a free digital version that has been optimized for use with a second screen device. If you are interested, you can purchase the standard edition of the guide for the action role-playing game with this link on Amazon. 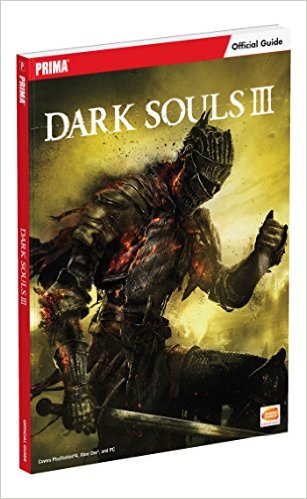 You might also want to consider the collector’s edition of the product as well. Along with all of the above, the bundle also comes with a premium hardcover along with the 192-page Darksign Journal. You can buy the Dark Souls III Collector’s Edition: Prima Official Game Guide here. If you want even more extras, then you should pick up the Estus Flask Edition of the official strategy guide. Along with having everything from the standard and collector’s edition, this set also comes with a  opaque polyresin Estus Flask replica (which is designed for display only as it won’t hold any liquid) in addition to an eight inch metal bookmark, dust jacket and a collectible box to store everything in. You can order the Dark Souls III Prima Official Game Guide Estus Flask Edition via this page. From Software has created several excellent expansion packs in the pass with The Old Hunters for Bloodborne as well as Crown of the Sunken King, Crown of the Old Iron King and Crown of the Ivory King for Dark Souls 2.

With Dark Souls 3, the studio is planning two major expansions that will add new bosses, enemies, maps as well as new armor and weapon sets. If you are planning on getting both DLC packs, then we suggest picking up the Dark Souls 3 as you can get a discounted price when compared to buying the two individually. You can purchase the pass with the following links: PC version, PS4 version and Xbox One version. One of the more underrated aspects of the Souls games is the soundtrack. The background music really sets the mood whether you are visiting a safe haven or tackling a boss. Luckily, the Dark Souls 3 official soundtrack is included in the Day One Edition of the game at no additional costs. The bundle also comes with a starter guide from Prima Games along with an O-Sleeve packaging. You can order the Dark Souls 3 Day One Edition with the following pages: PS4 version and Xbox One version.

The soundtrack is included in the Collector’s Edition as well, which also comes with all of the above-mentioned Day One Edition content. Furthermore, the bundle includes a cloth map, steelbook case, art book, 10 inch Red Knight statue and a collector’s box to store all the content. You can purchase the Collector’s Edition via the following links: PS4 version and Xbox One version.

To commemorate the launch of Dark Souls 3, Funko Pop has released a new figure based on the Red Knight. The stylized stands at approximately 3 3/4 inches tall and comes packed in a display box. You can check out the Funko Pop Figure here. Dark Souls 3 is being teased as the final game in the series. While you can play the sequel without any knowledge of the previous games, you will miss out on some of the call backs. So, if you haven’t done so already, you can purchase the first two Dark Souls games with the following links: Dark Souls: Prepare To Die Edition and Dark Souls 2: Scholar of the First Sin.

While not part of the trilogy, we also highly recommend Bloodborne as it features many of the same elements that make the Souls series so great while adding some unique twists to the excellent core gameplay. You can purchase the PlayStation 4 exclusive with this link.

PlayStation Plus and Xbox Live Gold

Last but not least, we also suggest picking up a PlayStation Plus (on PlayStation 4) or Xbox Live Gold (on Xbox One) membership if you aren’t already a member. This is because you will be missing out on the online elements, including the ability to summon other players for help in addition to being invaded by another player that will attack you.

So, if you aren’t already subscribed, you can order a one year subscription to the two services with the following pages: PlayStation Plus and Xbox Live Gold. Fortunately, PC players do not have to worry about paying for the online elements.

If you are buying Dark Souls 3, make sure you check out the complementary products we mentioned above so that you can get the most out of your time with the latest masterpiece by From Software.