Sony has five currently-announced official PlayStation 4 bundles that will be available during Black Friday and the rest of the 2015 holiday season. If you are looking at purchasing a PS4, the amount of choices can be somewhat overwhelming. Below, you can find our buying guide that will help you find the best PS4 system bundle to purchase based on your preferences.

If you are planning on getting a PlayStation 4 during the holidays, you will be able to pick between five official options.

The other three bundles feature a specially designed PlayStation 4 console. The limited edition products include the Call of Duty: Black Ops III Limited Edition 1TB PS4 Bundle, which has a jet black background along with several orange logos plastered on both the console and the DualShock 4 controller. The product also comes with a physical copy of the game along with the Nuk3town bonus map. Take a look at the Black Ops 3 bundle with this page.

Sony will also be releasing a special Darth Vader theme console and gamepad. One of the bundles comes with a physical copy of Disney Infinity 3.0 Edition, Disney Infinity Base, Rise Against the Empire Play Set Pack and Boba Fett figure in addition to the aforementioned Star Wars Bounty Hunter, Star Wars: Jedi Starfighter, Star Wars: Racer Revenge and Super Star Wars digital games. Check out the Walmart-exclusive Disney Infinity Bundle with this link.

If price is a factor in your buying decision, we suggest getting either the Star Wars Battlefront PS4 Bundle or Uncharted: The Nathan Drake Collection PS4 Bundle. The former comes with one brand new game built for the PlayStation 4 along with four remastered versions of classic releases. The Uncharted Bundle has three remastered titles although they are of more recent games.

So, in this case, your choice will boil down on whether or not you are more interested in Star Wars or Uncharted.

If you are looking for a family friendly bundle, then you can limited you choices to the Star Wars bundles. Call of Duty: Black Ops 3 has a Mature rating while the three games from Uncharted: The Nathan Drake Collection all got Teen ratings (as those games can be very violent).

Disney Infinity 3.0: Star Wars Limited Edition PS4 Bundle is the safest choice, especially if you and/or a loved one enjoy collecting figures. The Star Wars Battlefront system bundles are also great options. While Battlefront is more violent when compared to Disney Infinity 3.0, the game is not any more egregious than what you see in a typical Star Wars film.

Another factor to consider is the hard disk drive space. The Call of Duty: Black Ops III Limited Edition PS4 Bundle is the only one on the North America market to come with a 1 TB HDD as the others are equipped with a 500 GB drive. If you are planning on playing lots of games on the PlayStation 4, then the free space can quickly dwindle.

In this case, you can either pick up the Call of Duty: Black Ops III Limited Edition 1TB PS4 Bundle for more breathing room or buy one of the 500 GB models and then manually upgrade to a bigger drive by yourself. If you choose the latter, we recommend picking up the OWC DIY 2.0TB Drive Upgrade Bundle for the PlayStation 4, which you can check out with this link, to get all the necessary tools. 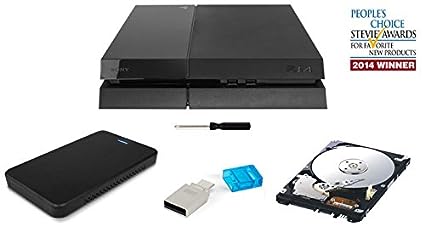 No matter your choice, the PlayStation 4 has some solid first-party exclusives and third-party multiplatform titles on the market. Not to mention that the future, especially the 2016 lineup, is looking extremely promising as well. If you are planning on getting a PS4 for this holiday season, make sure you check out any of the above-mentioned five official bundles.