Part of Nintendo Touch Generations’ Games (which are titles that are made for people who usually don’t play videogames), Elite Beat Agents is a rhythm game that appeals to both casual and hardcore players alike. So is the unique release worth seeking out? Find out with our retro review.

The spiritual successor to the Japanese original (Osu! Tatakae! Ouendan), Elite Beat Agents received an American makeover to cater more to American tastes. The main characters are three government agents whose job is to help people. Every time someone cries for help, the Elite Beat Agents will rush to them. To assist, these three individuals must dance to different tunes to encourage their clients to overcome their dire situations.

The story is separated into 18 independent stages (three of which are hidden). Each stage has its very own stand-alone story (with the exception to the last stage). Each of the stories is told through a comic-like presentation. They are very wacky yet addictive to play through, making the plot is the best reason to play Elite Beat Agents. Not much can be said about the graphics as much of the game use artwork with some animations (only the three agents are rendered in 3D during gameplay). The artwork looks great but they do not really stand out.

As a rhythm game, Elite Beat Agents is all about the music (make sure you use headphones as the Nintendo DS and Nintendo 3DS speakers aren’t very good). Each of the 18 independent stages has their very own music (with the exception to the final stage, which has two) that corresponds surprising well with the quirky story.

Elite Beat Agents’ track list includes a diverse collection of hits from the past. All of the songs are cover versions of the originals. These list includes the following:

With a diverse selection of songs, players may end up linking one stage over the other.

Elite Beat Agents takes full of the touch screen. Gameplay composes of three elements: hit marker, phrase marker and spin marker. For hit markers, players have to tap a circle spot on the screen at just the right time. Players do the same for phrase markers except they have to tap and hold the markers and then follow it along a path. Spin markers simply requires player to draw circles rapidly to fill up the spin meter.

Successes and failures are determined by the Elite-o-meter. The Elite-o-meter slowly falls, forcing players to be successful hitting all the markers to keep it up. Each stage usually has three parts; as long players keep the meter in green, they will get a good cut scene as a reward. If it’s red, players will get a bad cut scene. As long as you can keep the meter green at the end of the stage, you will be able to beat it.

Gameplay is simple yet addicting. Players will want to improve on their score over and over again. With different modes including difficulty and multiplayer levels, Elite Beat Agents has a very high replay value.

The game does have some imperfections, however. Players’ hands will obstruct the part of the screen; as a result, blind spots are present. Although it doesn’t affect the overall enjoyment, it is a minor annoyance that makes the game a little bit more difficult. Elite Beat Agents may not be a classic, but its unique and addicting features make it an experience no Nintendo DS or Nintendo 3DS owner can do without. You can buy the music rhythm game from Amazon here. 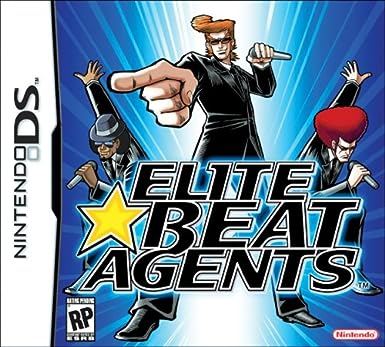 Check out the price of Elite Beat Agents with this link
Share: