Amazon has put up a product page for Star Wars Battlefront: Twilight Company, a companion book for the upcoming videogame. The hardcover version of the product is being published by LucasBooks with an ISBN-10 of 0345511212 along with an ISBN-13 of 978-0345511218. If you are interested, the Twilight Company is available for preorder with this link from the shopping website. You can also check out the placeholder cover of the companion novel below this paragraph. 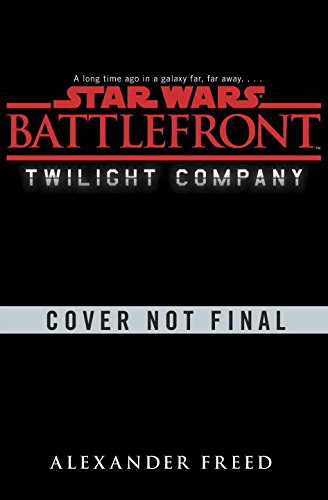 The book is being written by Alexander Freed, whose previously works include Star Wars: The Old Republic: The Lost Suns. The plot follows Twilight Company, an infantry of the Rebel Alliance, as they fight against the Empire. In total, there will be 400 pages to read through. You can check out the story details from Amazon’s listing below:

Among the stars and across the vast expanses of space, the Galactic Civil War rages. On the battlefields of multiple worlds in the Mid Rim, legions of ruthless stormtroopers—bent on crushing resistance to the Empire wherever it arises—are waging close and brutal combat against an armada of freedom fighters. In the streets and alleys of ravaged cities, the front-line forces of the Rebel Alliance are taking the fight to the enemy, pushing deeper into Imperial territory and grappling with the savage flesh-and-blood realities of war on the ground.

Leading the charge are the soldiers—men and women, human and nonhuman—of the sixty-first mobile infantry, better known as Twilight Company. Hard-bitten, war-weary, and ferociously loyal to one another, the members of this renegade outfit doggedly survive where others perish, and defiance is their most powerful weapon against the deadliest odds. When orders come down for the Rebels to fall back in the face of superior opposition numbers and firepower, Twilight reluctantly complies. Then an unlikely ally radically changes the strategic equation—and gives the Alliance’s hardest-fighting warriors a crucial chance to turn retreat into resurgence.

Orders or not, alone and outgunned but unbowed, Twilight Company locks, loads, and prepares to make its boldest maneuver—trading down-and-dirty battle in the trenches for a game-changing strike at the ultimate target: the very heart of the Empire’s military machine.