Amazon has listed the Batman: Arkham Knight Robin Action Figure, providing a look and some details on the upcoming product. If you are interested, you can preorder the latest DC Collectibles release via this link from the online retailer’s site. You can check out the Robin Action Figure underneath this paragraph. 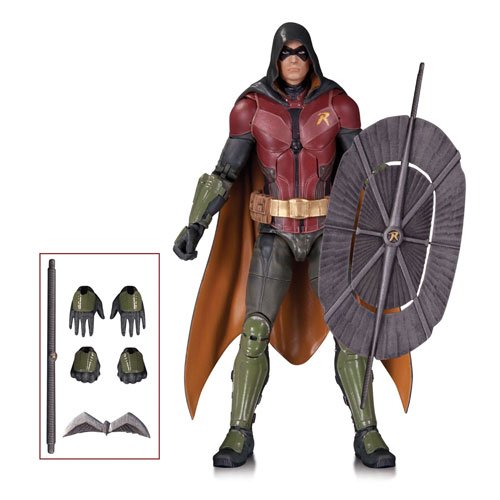 As you can see above, the product is based on Robin’s appearance in the sequel. Along with the main figure, it also comes with a shield, two pairs of alternative hands and several weapons. Overall, the statue stands at around 6 3/4-inches tall. Amazon expects the product to come out next year on the 29th of January.

In the upcoming game, you will be able to control Robin using the new dual-play mechanic, which lets you switch between Batman and other allies to pull off tag-team maneuvers. With the sequel expected to end the overall story arch of the Arkham games, you can also expect the sidekick to play a big role in the plot as well.

Batman: Arkham Knight is due to launch on June 23rd for the PlayStation 4, Xbox One and PC platforms after several delays. The original launch was set for the fall of last year but ended up being delayed to June 2 of this year before being postponed again.