Some details and images have been listed by Amazon.de for the Logic3 Trigger Power Games Quickshot Triggers. You can check out the images of the third-party PlayStation 4 accessory below this paragraph. 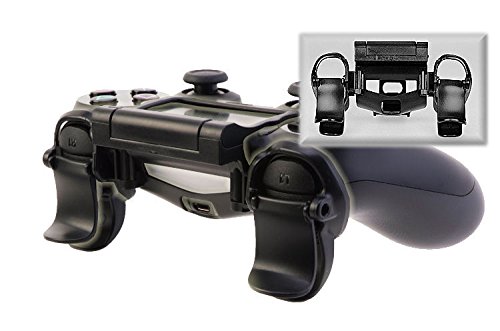 As you can see, the Logic3 Trigger Power Games Quickshot Triggers can be easily attached to the shell of the DualShock 4. It extends the reach of the L2 and R2 triggers, apparently improving the usage of the buttons during faster-paced gameplay. The product came out on the 17th of June in Germany. It is unknown the triggers will be released in the North American region.

Sony designed the DualShock 4 to addressed some the complaints from the DualShock 3. One of the biggest fixes was the above-mentioned L2 and R2 triggers. Instead of using a convex design, the DS4 uses concave triggers. With that said, some gamers may still have some problems with using the L2 and R2 buttons. If you are having trouble, then you might want to check out the Logic3 Trigger Power Games Quickshot Triggers.