Like most popular JRPG releases, Final Fantasy Type-0 HD is getting an official strategy guide. The book, which has 352 pages, is being published by Prima Games. So will the Final Fantasy Type-0 HD: Prima Official Game Guide be worth the price of admission? Let’s check out a few factors before you can come to a conclusion.

About Final Fantasy Type-0 on PSP

Final Fantasy Type-0 does not play like your traditional mainline Final Fantasy game as your actions occur in real-time. So you are directly responsible for attack, dodging, summoning and more instead of issuing a command via menu.

Similar other JRPGs, the battle system in Type-0 has plenty of depth as you can pick between plenty of playable characters, each of which has their own unique stats and abilities. There are also multiple magic spells, summon creatures and group attacks.

The original PSP version can get quite hard at the end as a few players did not finish the main campaign. As a result, Square Enix decided to make some changes with Final Fantasy Type-0 HD.

About Final Fantasy Type-0 HD on PS4 and Xbox One

Aside from the enhanced visuals, Square Enix also improved the controller layout. Thus, the camera and character switching schemes have been made a lot easier on the PS4 and Xbox One versions when compared to the PSP game.

Another major difference is the multiplayer, or the lack there of, in the HD remastered release. This is because Square Enix wanted to release the game as soon as possible and porting the multiplayer from the PSP over would have delayed its luanch. Instead, the spells that previously appeared exclusively in the multiplayer mode will be added to the single-player campaign.

Of course, if you don’t feel like waiting for the free guides to be updated (especially if you are buying the remastered release on the first day), you might want to consider buying the Final Fantasy Type-0 HD: Prima Official Game Guide.

The guide is advertised to provide a detailed walkthrough with 100 percent completion. Along with the helpful texts, the detailed maps are also included to help you find items and other hot spots. The coverage includes details on how to best take advantage of the large cast of playable characters along with a bestiary containing the best way to defeat particular enemies. Last but not least, gamers who purchased the product will receive a digital version for free to use on your mobile devices.

Prima Games is also adding several extras that should please hardcore Final Fantasy fans. For one, the guide is bundling in a bonus lithograph crated from high quality textured paper. The book publisher is shipping the product with a premium hardcover as well. You can check out its design below this paragraph. 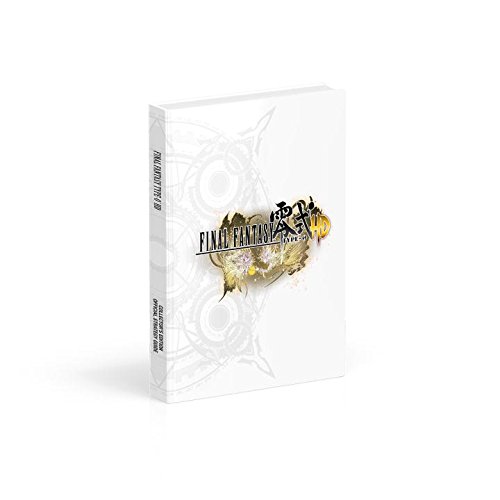 One last piece of information is also quite important as the official Final Fantasy Type-0 HD strategy guide is only being printed once. So, if you don’t purchase it early on, you may end up paying a hefty mark up in price due to its rarity.

Final Fantasy Type-0 can end up being quite difficult although Square Enix did made some changes with Final Fantasy Type-0 HD that will make things easier for PlayStation 4 and Xbox One gamers. With that said, completionists who are planning to buy the game on day one should definitely check out the Final Fantasy Type-0 HD: Prima Official Game Guide. If you are a collector and/or hardcore fan of the series, the book should also be worth its price of admission. Just make sure to get it early before its first print allocation is completely depleted.

The official Final Fantasy Type-0 HD guide is coming out on the 17th of March, the same release date as the videogame. You can preorder the book on Amazon with this page.